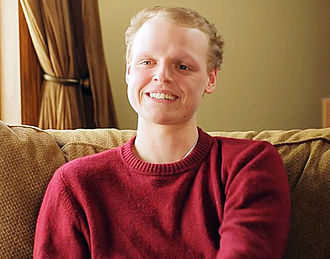 This is the truly inspiring story of Zach Sobiech, a teenager from Minnesota who was diagnosed with Osteosarcoma, a bone cancer that mostly strikes children. He was only 14 then and like any teenager had lots of aspirations to do many things. He was planning on a date with his girlfriend when the fateful diagnosis was being made. He had to drop the idea of a picnic with his girlfriend.

During this phase, he went through 10 surgeries and 20 rounds of Chemotherapy. The doctors treating him exhausted all medical options when he was around 17 and gave him at the best one more year to live. Still, Zach decided to live like he always did, with a smile on his face, embracing every day with hope and joy. On May 20, 2013, Zach sadly passed away at the age of 18, but not before touching millions of lives.

His mother, Laura, always prayed  “Okay, Lord, you can have him. But if he must die, I want it to be for something big. I want someone’s life to be changed forever.” With this desperate prayer, she released her son to God’s will.

With a very heavy heart, she told him to think about writing good-bye letters to family and friends. Zach, however, had different ideas. Resorting to music was the only way he could think of, as a means to deal with his illness. Zach was always fond of music. He was to be seen with the guitar most of the time. When faced with the proposition of life for only a year, he trusted the music to help him deal with the turbulence he was facing.

He therefore decided to write songs instead of letters. This was to be a very personal song and his way of saying goodbye to his family and friends. It was to be a token of remembrance for his near and dear ones. The song he penned was titled “The Clouds”.

When the song was released, it became an instant internet sensation and went completely viral capturing even the attention of many celebrities including Rainn Wilson, Anna Farris, Rachel Bilson and Ed Helms to name just a few. The deeply personal song ended up touching the lives of millions of people around the world. “Clouds” reached the No. 1 spot on iTunes with every download donating to his fund. This was people’s way of acknowledging how this true inspiring story had moved them.  It touched 3 million views at the time of his death and currently has more than 10 million views.

Tributes poured in moved by this true inspiring story

Artists have released many tributes, including many cover versions of “Clouds” — with a prominent version of “Clouds” released on SoulPancake featuring director Rainn Wilson himself along with Bryan Cranston, Ashley Tisdale, Jason Mraz, Sara Bareilles, Colbie Caillat, The Lumineers, Sara Bareilles and many others.

On December 5, 2013 a choir of 5,000 sang Sobiech’s “Clouds” at the Mall of America. This event was organized by the KS95 Kids Radiothon in collaboration with the Children’s Cancer Research Fund and Gillette Children’s Specialty Healthcare.

But this true inspiring story is not just about music. It’s a testament to what can happen when you live as if each day might be your last. It’s a story about the human spirit. It’s probably also about how God used a dying boy from a small town in Minnesota to touch the hearts of millions—including top executives in the music industry, major music artists, news anchors, talk show hosts, actors, priests and pastors, and school children across the globe.

Zach’s mother Laura Sobiech wrote a memoir about his life, Fly a Little Higher: How God Answered a Mom’s Small Prayer in a Big Way.

“As far as conversations with Zach, he was a teenager so he still had a lot of things that most of us had the time to go through. He didn’t have that time, so he had to pack that all into just a couple of years. I know he went through times when he just really wondered if God was real. If heaven was real. And he had to work through that too. And he had to deal with fear of death and what that would be like. The process of dying, but then also what comes after,” she said. She explained that Zach refused to be boxed in by his disease in his last days.

His family started the Zach Sobiech Osteosarcoma Fund and directed proceeds from his music and other fundraisers held in his honor to help researchers find better treatments to prevent and cure this disease.

Cancer may have taken Zach from us too early, but his spirit continues to be a beacon of light and benevolence in a world that sometimes weighs too heavily. Laura explains that through “Clouds” and Zach’s eventual death, his story has helped bring attention to a little known cancer that affects about 450 children and adults in the United States annually.

“We’ve dedicated all of the money we have made from his song “Clouds” to that fund,” said Laura in a recent interview with The Christian Post.

Zach true inspiring story continues to inspire his family and his fans to help the children of tomorrow who are diagnosed with Osteosarcoma.

“My closure is being able to get my feelings into these songs so they can have something to remember me by or lean on when I’m gone,” Zach explains in the SoulPancake video. “I want to be remembered as a kid who went down fighting, and didn’t really lose.”

We’ll see you again Zach, up in those clouds.

Well I fell down, down, down
Into this dark and lonely hole
There was no one there to care about me anymore
And I needed a way to climb and grab a hold of the edge
You were sitting there holding a rope

When I get back on land
Well I’ll never get my chance
Be ready to live and it’ll be ripped right out of my hands
Maybe someday we’ll take a little ride
We’ll go up, up, up and everything will be just fine

And we’ll go up, up, up
But I’ll fly a little higher

We could go up, up, up
And take that little ride
And sit there holding hands
And everything would be just right
And maybe someday I’ll see you again
We’ll float up in the clouds and we’ll never see the end