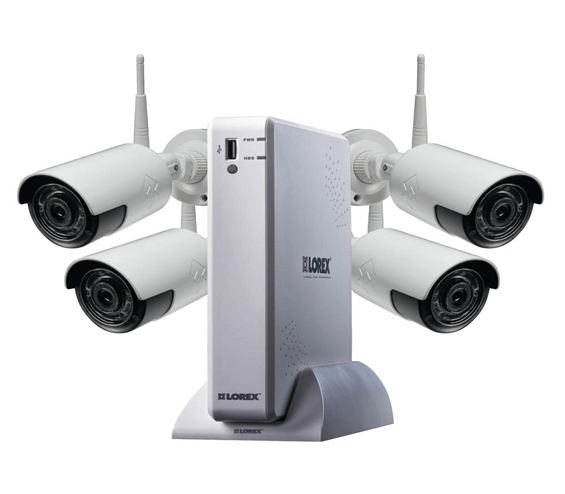 The types of security cameras into various categories.

Home cameras under this category include;

a. Bullet cameras- these are those cameras that are shaped like long cylinders. The shape and style of these cameras allow for better visibility. This feature is, however, a downside as intruders can recognize where the cameras are located, and hence they are easy to vandalize. On the other hand, the fact that they are visible helps to keep intruders off as they know that they are likely to get caught.

b. Dome cameras- these cameras take the shape of a dome. They are commonly but not exclusively used indoors and, in most cases, are referred to as ceiling cameras. They provide a broad coverage angle and are less prone to tampering.

b. Wireless cameras- these are cameras that do not require a power cord for connection.

c. Wire-free cameras- these are those cameras that do not use any cable at all. The footage collected by these cameras is stored on the cloud. Also, the cameras operate on batteries.

a. Indoor cameras- these cameras are located on the indoors. They are designed in such a way that they cover a full field of view. Most cameras in this category feature up to 360-degree coverage. The cameras, therefore, can be used to monitor all parts of the house.

b. Outdoor cameras- as the name suggests, these cameras are used outdoors. They feature a durable and water-resistant design that can withstand the elements of weather. They are also designed to cover a wide-angle and provide footage of the entire yard or outdoor environment.

Other cameras are categorized according to the unique features of the device. For instance, motion detector cameras, as the name suggests, are those that have motion detection features. Such cameras only begin to capture footage once they have detected movement or activity. These cameras can either be used inside or outside the house as they provide added protection.