Jessica Cox – The Pilot without Arms 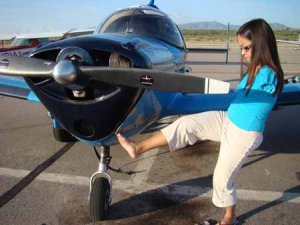 I remember the dreadful three months when I was down with an ankle fracture. Those agonizing three months made me realize how certain things we so casually assume about our body when we have proper functioning limbs. I’m sure anybody who had fractured their hands, would have had a similar experience. But what if you are born without arms? You cannot even do a handshake or write. But one woman, Jessica Cox, defied all the odds and went on to become a licensed pilot. Here is Jessica’s true story.

Jessica Cox was born in 1983 without arms, a rare birth defect. Doctors could hardly give any explanation as various tests and reports failed to reveal any defective medical condition. Her father, William Cox, a retired band teacher and her mother Inez, took Jessica to several doctors. All their efforts proved to be in vain as there was no answer. It just seemed that Jessica was destined to be without arms.

“As a child, there was no way to understand why I did not have arms like everyone else. It was difficult being different,” says Jessica Cox.

Her parents William and Inez opted for the next best solution – use prosthetics to make up for the missing arms. But by the time Jessica Cox was in seventh grade, she refused to wear them. And by the eighth grade, she finally decided to take off her prosthetics before boarding the school bus. “As the bus door closed behind me, I felt freer and independent. Since that day, I never wore the prosthetics again.”

However, that did not deter Jessica from doing things what other kids could have. Though challenging, she decided to use her legs for everything. And she ended up doing much more than others her age could have done. At age 3, she joined Gymnastics and by 6 she was swimming at their backyard pool. She even enrolled for a dance class and tapped to the rhythms. .

Jessica admits that she was quite shy when she was around other children and adults. “I used to feel shy about being different. I remember the first time I was on stage. It was my very first at our dance studio presentation. I was so scared that I asked my dance teacher to put me in the back row. She told me there was no back row.” Fortunately, after the show, the audience clapped and cheered for her. “I couldn’t wait to go out for a second time and perform. I danced for 12 years after that,” she said.

The bigger challenge for Jessica in her growing years was the constant stares she got wherever she used to go. “I used to get very irritated when people stared, especially when I’m walking down the street or eating with my feet. But I’ve learnt to turn that into something positive and use that opportunity to channel positive vibes and be an example of optimism.”

Today, Jessica cooks, eats, washes dishes, curls her own hair, and writes and types with her feet. She also likes to swim and ice skate. She even uses her legs to put in or remove contact lens or blow dry her hair or put on her makeup. But Jessica didn’t just live a sedentary life doing these daily chores. She actively participated in Ta Kwon Do and at the age of fourteen, she received her first black belt. She received a second one after she rejoined the American Te Kwon Do Association later in college. This is no mean achievement by any stretch of imagination. She can type 25 words per minute using her legs and even play the piano. She later on went to marry her Ta Kwon Do instructor.

When Jessica was encouraged to learn to drive, she started with a car with some modifications. However, she later decided to do away with these modifications. Now, she drives a car without any modifications and holds an unrestricted license. And yes, she uses her legs to wear the seat belts and steer the car.

“My mum is my role model and always tells me I can do anything I’ve set my mind to.” says Jessica who credits her parents for being role models and pillars of support. “My dad never once shed a tear when I was born because he did not see me as a victim. It is hard being a parent to a disabled child. He was my rock during the difficult times and that has shaped me into the person I am today.” she said.

Jessica had always been afraid of flying in commercial planes since childhood. Hence, becoming a pilot was never an agenda in her life. This was to change however.

In 2005, Jessica had just finished a motivational talk at a Tucson based non-profit group. The group uses aviation as a motivation. It was here that she was approached by a fighter pilot named Robin Stoddard who represented the group and asked her if she would like to fly an airplane. Being the optimist that she is, Jessica decided to go for it.

She learned to fly in the rudderless light Ercoupe aircraft, where you only need your hands to control it rather than both hands and feet. Ercoupe aircraft is one of the few airplanes to be made and certified without pedals. Without rudder pedals Jessica is free to use her feet as hands. She took three years instead of the usual six months to complete her lightweight aircraft licence, had three flying instructors and practiced 89 hours of flying.

She went on to earn a US Federal Aviation Administration sport pilot licence . Jessica is now training to become an instructor – so she can help other disabled people learn to fly.

“When I fly, I have the greatest feeling of freedom, independence and power,” said Jessica, who controls the throttle with her left foot and the yoke with her right. One mother’s day, she flew a plane with a banner attached to it reading “Look Mom, without arms!”

Jessica Cox is currently a motivational speaker. She now talks almost daily to schools, businesses, and public crowds literally across the nation. Whether it is about overcoming the fear of flying, learning how to walk, or doing well in school, she helps thousands each and every day. Defying the standards of what she calls a “two-handed” world, Jessica shares in her speeches humorous stories of struggles and success.

Jessica is also the subject of an upcoming documentary titled “Righfooted”, directed by Emmy Award winner Nick Spark. This documentary chronicles Jessica Cox’ life, mentorship, humanitarian trips to Ethiopia and the Philipines, as well as her efforts to pass the Convention on the Rights of Persons with Disabilities (CRPD) in the US Senate.

Jessica firmly believes that “Life is 10% what happens to you and 90% of how you respond to it”. Jessica has more than demonstrated her belief on how she has responded to the biggest challenge she had to  face since birth. “My message is that disabilities are not limited to physical. They shouldn’t stand in the way of success, there’s no handicap to success.”

So, the next time you feel that you “Can’t” or something is “impossible”, think again !!!