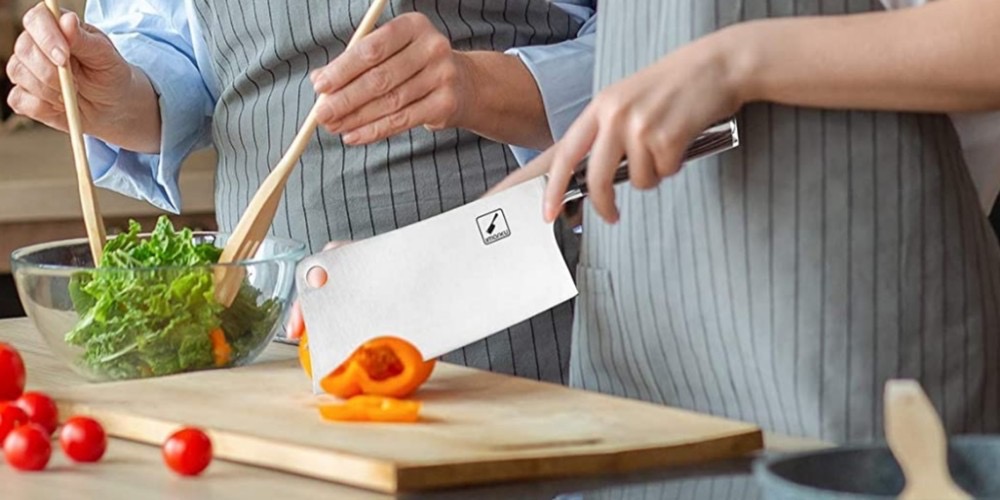 These knives are sometimes classified as the same because they have some common features. But despite these similarities, the butcher knife and the meat cleaver are different knives that are individually unique. Here, let’s take a look at their differences by highlighting their various uses.

A butcher knife is a big kitchen knife that is designed to be used to butcher and dress animals. The butcher knife dates way back to the 18th century, where it was used as a multipurpose tool by mountain men. Its uses back then ranged from cutting food and skinning beavers to scalping and self-defense. It was a very accessible tool back then; simple and cheap. Today, the butcher knife is popular around the world, but only as a tool for meat processing. And although it is used for several other purposes, it functions at its best when cutting through hard meat.

A butcher knife has a variety of uses, but the commonest includes

In summary, the butcher knife is designed for chopping raw meat, and the slight curve towards the top end of the knife makes it ideal for cutting through meat parts.

A meat cleaver is a large kitchen knife that has a rectangular-shaped blade. It often comes in different sizes, and the size to be used is selected depending on what it will be used for. The meat cleaver is sometimes referred to as a type of butcher knife because it performs certain butchering tasks comfortably. However, the meat cleaver is purely a kitchen knife, and it is mostly used for cutting meat in the kitchen. But unlike other kitchen knives, the cleaver is made with thicker steel, and it has tough edges that can withstand repeated blows on hard meats. The knife is a little less sharp compared to other kitchen knives like the chef knife. Hence, it depends on the shared strength of the person swinging it to cut effectively.

The uses of a meat cleaver in the kitchen include;

Indeed, the meat cleaver and the butcher knife have lots of similar functions, but here are the key differences between these two.

Get It Right: Choose the Right Lace Front Wig Size

What Is The Best Way To Choose A 613 Honey Blonde Wig?